Last week was a week that saw the completion of the well and the foundation.  The well was finished Tuesday and the foundation was finished Thursday.  Sometime this week Aug 6-10 the materials for the floor should arrive and hopefully soon after that the framing crew.  Two of the piles of topsoil that were left after clearing the lot are gone – used as backfill around the perimeter of the foundation.  Clearing those out along with the tall weeds that had grown on them has really opened up the lot.   The pictures really don’t do it justice but how exciting can a well casing or a foundation be, right? 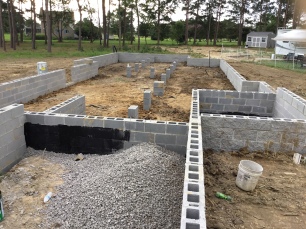 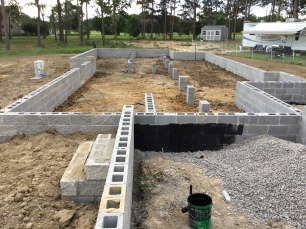 On the Human Side:

The weather has been very muggy so we try to walk the dogs early and late in the evening to beat the heat.  The wildlife is abundant and seems to be very adapted to the presence of humans and dogs.

Each morning, and often in the evening, we see some of the local deer and one young male in particular.  We know we’re seeing the same deer because he has an odd shaped antler -just  like the deer that collided with our car the first week we were here.   Barry is certain he’s the one because before the deer regained his composure and ran away Barry noticed the deformed antler.  Anyway, this fellow frequents Ophelia Cockrell’s old homestead that’s on our daily dog-walk route.  We almost always find him chowing down on something there.  He’s gotten so used to us that he just stops and stares at us as we walk by.  Frequently we’ll stop and just stare back at him, the dogs quietly at attention.  Sometimes Barry will speak to him.  Surprisingly this doesn’t startle him at all.  He just stands there, calmly looking at us, chewing away like humans talk to him every day.  Some evenings he’s joined by several large turkeys and a bunch of little ones.  Mornings frequently finds very young fawns in the distant fields that quickly scoot for cover in the tree lines when we approach.  One day we saw a bald headed eagle fly overhead and ospreys are a common sight every day.

The rabbits are abundant beyond measure and pluck poor Honey Bee’s last nerve.  We rarely walk the section of our road that leads to the dead end because they’re everywhere there.  There will be three or four of them on the side of the road and when we approach they just look up and watch us.  Honey knows theres no way we’re going to release her but she strains and crys and whines whenever she sees one.  Many of the yards with significant tree lines have 10-15 rabbits playing and chasing each in the evenings.   Those rabbits show no fear.  I’ve actually walked over to one of them and trying to shoo it way.  It just looked at me.  The other night Barry found a very young one  in our yard and it let him rub it’s head and back.

Each day, whether we’re walking on our small country road encountering the wildlife, speaking to neighbors, or just pausing to look out at the bay,  we’re amazed at where God has brought us.  We’re amazed by His creation, by His ever changing canvas that we get to enjoy 24/7.  We’re grateful that we’ve been given the chance to experience something almost Eden-like in many ways.   And this is what I hopefully will remind myself of in the coming days,  if the build process or some aspect of settling into a new place gets to me and I find myself frustrated or upset.  Which I am sure will happen because after all, we are human.

So, this is what I will remember : bald headed eagles, defiant bunnies, curious deer, ospreys hunting food for their young, crying loudly over the wind, sunrises awash in red clouds with a burning orange yellow ball breaking through, storm clouds racing over the bay, blue crabs chasing each other at the shoreline, sea glass polished and smooth, laughter of children playing in the waves, loved ones kayaking and fishing, cruise ships lights in the darkness of night, passing silently, sail boats dotting the horizon, people that wave whether they know you or not, dear, dear friends that pray when you ask,  an anointed teacher that drove home to my hungry heart “by grace alone, through faith alone, in Christ alone”, and a vision and a hope that this place will be a “pleasant harbor in the storms of life” not just for us but for many others.

So, so much that warrants a grateful heart.