When I came home from Richmond yesterday  I found our well driller, Mr. Fetterolf, his daughter and their crew hard at work  drilling our long awaited well.  Oh happy day!   Sounds a little over the top?  Maybe it is – but remember I’m living in an RV with two (2) dogs and a cat, and our water is graciously being provided by our neighbor via their outside water spigot and a very long garden hose.

What you also need to know to help you understand my glee is:

The fact that we’ve been talking with them since March about this well is an example of point #3.

By last week  we were beginning to despair of getting a well before this fall.  But Providence has made a way.  When Barry called to check on where we were in the queue, Mrs. Fetterolf said her husband was drilling a well “up the road” from us.  She said if we could get with him while he was on that job perhaps he could drill ours next.  She wasn’t quite sure of the address because homes under construction typically don’t have addresses around here until the OP is given.   Needless to say she gave Barry enough information to start his search and he immediately hopped in the car and took off trying to find him.   Find him he did, and they came and marked where the well would go.  And now they’re here!  Happy dance! –  Modified RV version.

Later that evening, the builder texted that the mason and his crew would be on the job site around eight today.   This had me trying to picture a well drilling truck, a water truck,  three crew trucks, an excavator and the truck and trailer to move it,  and then the two cement trucks vying for space on the small corner of the lot where the well and the driveway to the house site is.  It was tight to say the least but they made it work.

So, as I type this, looking out my kitchen windows  I can see the well drilling crew on one side of the RV and the mason’s crew in front of it.  From ZERO progress to significant progress in 24 hours!  YAY!

All day it’s been a beehive of activity with us right in the middle of it.  Of course, I am perfectly content to watch from inside the RV (too noisy!) but Barry is struggling not to be in the thick of it.  Luckily the dogs and the cat are ignoring it.  If my grandchildren  were here I know they would definitely want to be out there with “Pop Barry” in the thick of it.   Sorry guys.  Pictures will just have to do I guess. 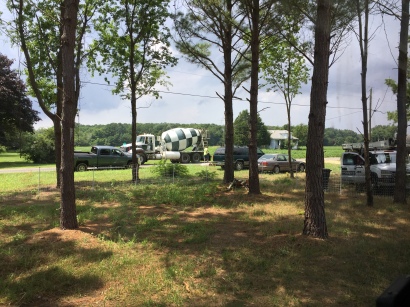 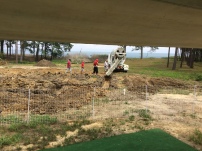 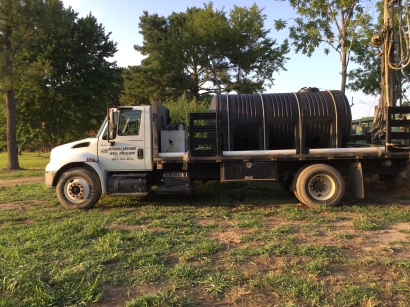 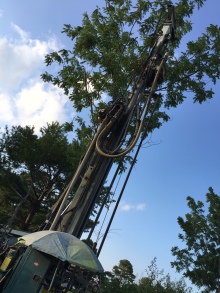 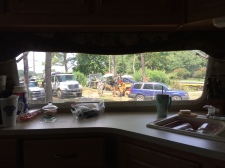 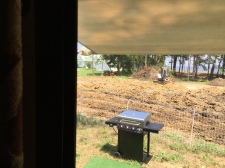